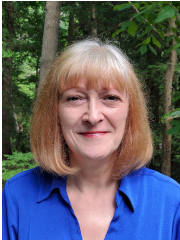 Many people are afraid of speaking in front of a group but Sally takes the terror out of public speaking and makes it easy to improve. Her classes are always highly interactive and full of demonstrations. She believes that no one should be told what they are doing wrong in their presentation without being shown exactly what to do in order to correct it. She provides specific techniques and practical tips that can be put to use immediately.

One of the reasons Sally is so effective is because she was an actress before she became a public speaker. She has adapted many Method Acting techniques to help speakers improve their body language and develop more vocal variety and stronger presence. She is a graduate of Drama Center London, the top Method Acting College in England, and she acted in repertory companies throughout England before moving to America.

Sally has fifteen years’ experience teaching public speaking. Clients include large companies such as FedEx, Comcast and PricewaterhouseCoopers, and also smaller companies and individuals. Sally has traveled and worked all over the US; she hosted television and radio shows when living in Texas, including hosting “PM Magazine” and a being a film critic for “Eyewitness News”. Her radio credits include hosting a daily radio show called “The Chopping Block”. She was even awarded the title of Kentucky Colonel by the Governor of Kentucky after she gave workshops for Toyota Motor Corporation. Sally’s advice about public speaking has been quoted in the Wall Street Journal.

Sally lives and teaches in Pittsburgh, but also travels to other parts of the US to deliver her workshops. Local activities she has particularly enjoyed include appearing as a body language expert on Pittsburgh’s Fox Channel 11 News and teaching classes in Humor at Point Park University.

“Sally deeply engages in understanding the context of any project. She will develop a comprehensive needs based program built upon her understanding of a specific circumstance against how to unleash the bridled confidence and passion of her client. Her programs are developed based upon the realtime needs and circumstances of her client and by accurately assessing a client’s skill set – and that is built upon a lifetime of experience and a severe passion for what she does. Sally Chopping delivers results.”

“Sally Chopping has delivered 5 public speaking / presentation skills classes to our team at NOVA Chemicals over the past year. The participant feedback has been resoundingly positive. Sally has provided practical, no nonsense, individualized feedback for the class participants in both written and verbal form. They in turn apply this feedback in their speeches and presentations, and you can instantly see the positive progress in ability to communicate effectively and capture the audience’s attention. Sally is a consummate professional with a delightful approach. I highly recommend Sally for anyone eager to improve their ability to speak and present.”